Why Image-Only Emails Hurt Your Marketing

Email marketers must consider how their emails are received by email platforms. The way the emails are built is crucial to how they appear to readers. You probably have seen image only emails, which are emails that consist of a single image. These types of emails can actually hurt your email marketing efforts more than using an HTML email that intersperses text and images throughout the layout. Spam filters, image blocking, and unsubscriptions are all elements that adversely affect image only emails more than HTML emails.

Most importantly, emails need to land in the inbox. Unfortunately, image only emails have a higher chance of being flagged as spam and sent to the spam folder, which means never being seen by recipients. This will instantly decrease open rates for image only emails.

You have seen images that don’t load in emails before. Many email providers block images unless you give permission for images to be displayed. Email marketers have a very short window to capture the interest of readers when an email is opened, which is why images can be so powerful. Readers can lose interest if images aren’t displayed though.

If the entire email is an image that doesn’t load, there’s a greater risk of people at best, not clicking. At worst, they will unsubscribe or mark as spam. And low click-through-rates and high unsubscribe rates are the worst metrics for email marketing. The example below shows an image only email, on the left is how it initially displays in the inbox, the right side shows how the email marketing team intended on it being seen. 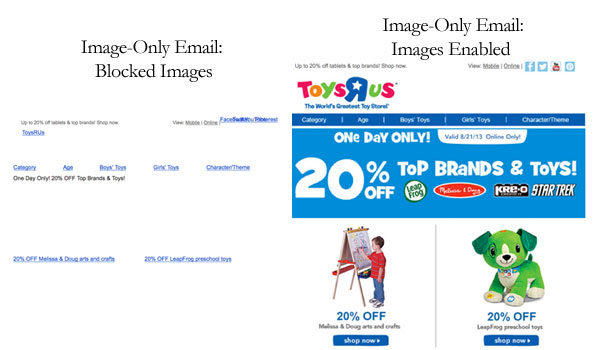 Emails that have a balance of text and images have a higher click through rate. Even if the images don’t load, the text will and readers will be able to understand the email, see the example below. Even though an image is blocked, the text (and call to action!) still shows.

Use HTML Emails Instead 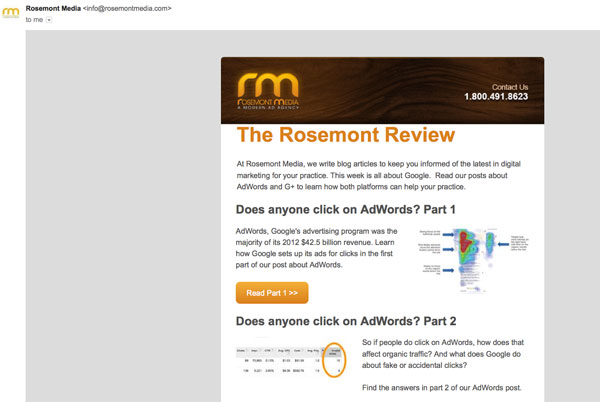 Using image only emails is too risky compared to using HTML based text and image emails. Hoping your emails land in the inbox, then are opened, then images are enabled so the content is visible, and an action is taken, is asking a lot of your subscriber list. You will have higher open rates and click through rates if you limit your use of images and use text based emails like the example above. For more help creating successful email campaigns, contact us.