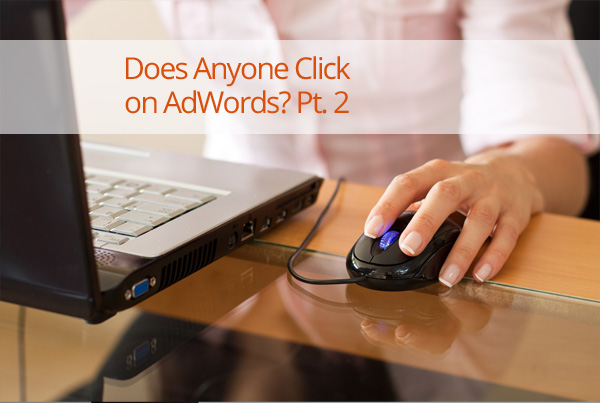 In our last blog post we discussed how Google strategically positions AdWords ads to receive the most clicks, essentially translating to more traffic for your site (to catch up, read “Does anyone click on AdWords? Part 1”). In this second and final installment of our AdWords blog series, we will discuss the effect AdWords have on the organic clicks you generate, as well as the validity behind each click you receive from your AdWords.

To assuage a common concern of clients, Google has shown that AdWords does not encroach upon organic clicks. By running “pause tests” (a scenario where AdWords campaigns are paused for several different companies to record how click results are affected), changes in organic clicks can be monitored and recorded. A pause test by Google in 2011 revealed that 89% of the clicks on ads were not replaced by an increase in organic clicks. This shows that the vast majority of clicks on ads add to organic clicks, rather than cannibalizing them.

To ensure AdWords ads receive quality traffic, Google monitors the activity of AdWords. Google detects fraudulent clicks, which are clicks that were “generated with malicious intent,” such as competitors clicking on ads. Additionally, Google looks for invalid clicks, which are activities that include “intentionally fraudulent traffic,” as well as accidental clicks. Invalid clicks are recorded in AdWords analytics, but not charged to the advertiser.

See What Traffic You Get from AdWords

Regardless of debates surrounding the moral turpitude of Google’s monetization strategy, running AdWords is an asset in your search engine marketing strategy. It makes sense for many practices, whether you’re a new practice seeking a front page presence or an established practice striving to dominate the front page. AdWords receives so many clicks because the ads hold the position most likely to be clicked. Also, AdWords is a low-risk tool for businesses since search ads don’t reduce the clicks on organic results and Google ensures only legitimate clicks are billed. To learn about the best AdWords campaign for your practice needs, contact us.