At Rosemont Media, we are constantly exploring the ever-developing world of online advertising in order to bring you the latest news and strategies. This includes social media – still an open frontier of digital advertising.

Since its IPO, Facebook has been publicly struggling with monetizing it’s platform. In its latest news, Facebook announced it is reducing the variety of advertisements it offers, which is currently at 27! While this is most likely going to benefit us as advertisers, there will be another learning curve when we adapt to the new types of advertising. Despite these new developments, one thing isn’t going to change: the basic setup of Facebook ads.

If you carefully answer the following questions, you will be on your way to a successful campaign no matter the type of advertising platform.

What is the goal?

For any advertising campaign, you first need to determine the goal. Are you aiming for brand visibility? How about more likes? No matter what, set up the ad creative, settings, and type of pricing according to your goal. For example: to get more likes, run a CPC campaign where you pay per click on your ad. To get more brand visibility, run a CPM campaign where you pay per impressions.

When it comes to the ad itself, ask yourself, “Is the ad appealing to your target market and created to get the desired results?” Use a simple, powerful image with a concise and clear caption to invite clicks and engagement. Remember to be appropriate because Facebook has stringent ad guidelines. For the healthcare industry, this means running ads for users 18 years and older. Pay attention to rules like: “Ads and Sponsored Stories may not contain ‘before and after’ images or images of unexpected or unlikely results,” or “Ads and Sponsored Stories may not call attention to perceived imperfections through the use of language such as, ‘Are you fat?’ or ‘Balding?’” Following these rules will allow your ads to be approved. 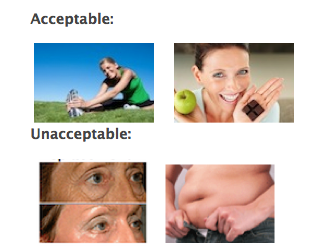 Are the settings optimized for your campaign?

No matter the advertising platform, you need to know the user behavior. For example, studies show people use smartphones to access Facebook more often on the weekends than on weekdays. Holidays are also a period of fluctuating Facebook habits. In order to plan for these different user behaviors, you should run a campaign long enough to connect with users during the week and weekend, as well as get an idea of peak engagement times.

Target your users specifically. Start with setting the geographic location and then adding different demographics. Targeting friends of friends is a good place to begin, too.

Above all, make sure you set a clear budget because Facebook will spend all of it. Set up either a budget per day (like $5), or a budget for the campaign as a whole (like $200). Don’t forget to set an end date, or your campaign will be ongoing (which is fine, as long that’s in your budget, of course).

Have you measured the results?

Facebook’s ad analytics are a little clunky, but getting better. When you review your campaign, look at the metrics that will decide if you met your goal. Look at the number of likes, click through rates, reach, and cost per like. If it becomes too expensive to gain likes, end your campaign.

If you want to optimize your ads, then run similar ads but change one aspect to see which performs better. For example, if you want to know if adding a question in a caption is more effective than a regular sentence, run the two ads with the same image and separate captions to see which performs better. This is called A/B testing and can be the most effective way to learn how to make successful campaign. Always strive to improve your results and stay creative.

By answering each question above before starting a Facebook campaign, you will be able to more effectively set up your campaign for success. When Facebook rolls out its new advertising product, you will be able to weather the changes because you now have a solid foundation of creating campaigns. To answer any questions about setting up the right Facebook campaign for your practice, contact us.