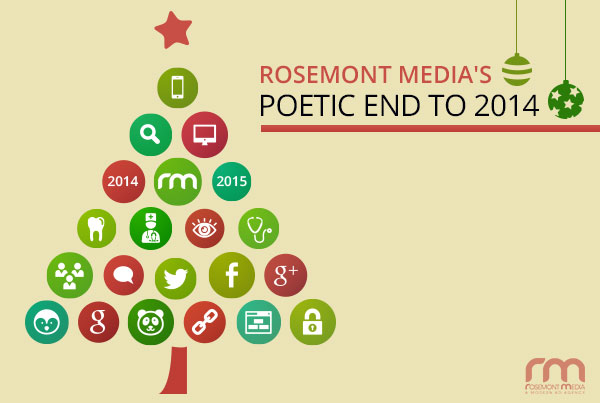 ’Twas two days before Christmas, when all through the office
the consultants were working hard, yes, even Jana Wallis.
The design team still labored, and all the developers too,
while this writer sat and reflected on the year in review.

Two thousand-fourteen marked RM’s sixth year of life,
a venture first embarked upon by Keith and his now wife.
From January to December, we’ve seen changes big and small.
I’ll try to touch on most of them, but I can’t promise I’ll get to all.

As predicted by our CEO in his annual prophetic post,
Google again made updates, emphasizing links and content most.
After Panda received a refresh, Penguin later followed suit,
and the two beasts combined to give spammy websites the boot.

Web surfing on mobile devices continued its upward trend,
and as a result, responsive design became a necessity to append.
“But that’s not all,” Google did say, “Have you seen search results lately?
A distinctive new label appears, from which mobile sites benefit greatly.”

A push for Internet security made headlines in SEO news.
In fact, switching to HTTPS is something you should muse.
If you choose not to make the change, well that’s okay for now,
but doing so is advantageous, and that to you we vow.

With the need for social media marketing reaching all new heights,
we revamped “RM Social” and introduced it under the lights.
Many clients have gained more followers, improved engagement as well,
and thanks to our devoted SM team, their custom strategies excel.

Yes, 2014 has been a great year; we’ve much to be grateful for,
but we can’t help being excited to see what 2015 has in store.
Clients new and old, we thank you for making our job fun.
From Rosemont Media to you and yours, “Happy Holidays, Everyone!”